Gary M. Gilbert is an attorney, consultant, and mediator specializing in the area of employment discrimination law. He has lectured and written extensively on various aspects of employment law. He is a former Chief Administrative Judge with the U.S. Equal Employment Opportunity Commission. In his sixteen years as an administrative judge with the EEOC, he presided over hundreds of employment discrimination complaints and supervised the case management of thousands of others. He served on numerous workgroups and committees while with the EEOC, and had substantial input into the Commission’s regulatory reforms enacted in 1989, 1992, and 1999 and the accompanying changes to the Commission’s Management Directives to federal agencies. While with the EEOC, he also provided substantial input into the Commission’s guidance and regulations on the American with Disabilities Act and he was one of three individuals responsible for developing materials and training all Commission lawyers on disability law after passage of the ADA. Prior to his appointment at the EEOC, he worked for Florida Rural Legal Services, Inc., where he litigated a variety of cases including employment matters, and directed one of the largest pro bono legal programs in the country. He also served for four years as the legal assistant to the Secretary of the Nuclear Regulatory Commission.

He is a frequent speaker on employment matters, appearing at conferences such as the annual Federal Dispute Resolution Conference and the annual EEOC–sponsored EXCEL conference. He has been called upon to provide training for lawyers, non–attorney representatives and other employees at many federal agencies.

Mr. Gilbert’s law office is located in Silver Spring, Maryland. He is also a partner in the management consulting firm of Vitaro, Goodfriend & Gilbert. He is a graduate of the University of Maryland School of Law and is admitted to the bar in the states of Maryland and Florida. He lives in Silver Spring, Maryland with his wife, Diana, and has two daughters, Michelle and Stacie. Mr. Gilbert can be reached at gary@ggilbertlaw.com.

Updated with cases through mid-2021, the Disability Deskbook is an extensive compilation of decisions interpreting the Rehabilitation Act, ADA, ADAAA, and other statutes and implementing regulations, and covers all disability related topics. Major topics include who is covered under the ADA, specific impairments, major life activities, "regarded as having a disability," "qualified individual with a disability," reasonable accommodation, undue hardship, direct threat defense, and disability related inquiries. (more details)

Learn how to effectively and efficiently investigate allegations of employee misconduct with examples, sample forms, and case law discussion. Major topics include what a management inquiry is and how one differs from an administrative investigation, the advantages of an inquiry, how to select a good inquirer, discussion of rights and responsibilities of the inquirer and inquiree, limitations on the inquirer’s authority, interim action, typical charges and penalties, inquiry basics, beginning the inquiry, defining the issues, identifying witnesses, preparing for the inquiry, document gathering, the interview and other ways to collect information, witness preparation, post report activity, and how the report will be used. (more details)

Save 25% on both the Broida & Gilbert on EEO Advocacy and Representing Agencies and Complainants Before the EEOC.
Use the drop down box to select the discount.

*optional Representing Agencies and Complainants Before the EEOC +$175 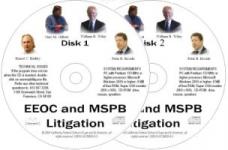 
Whether practicing before the EEOC or the MSPB, this training software explores and dissects each step of the litigation process. From pre-discovery to closing arguments, the speakers detail what practitioners before the Board and Commission need to know. (more details) 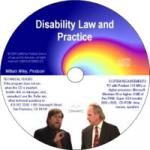 
From the basics of disability law to guidance for practitioners on how best to represent agencies or complainants, this training disc provides a practical lesson on this complex subject. Materials include an examination and explanation of relevant laws, cases, and key terminology. (more details) 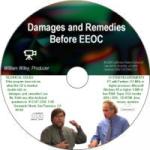 
Whether assessing exposure or entitlement to compensatory damages, evaluating proof of damages and causation or some measure in between, this practicum provides practical strategies for pursuing or defending against claims for damages and remedial relief before the EEOC. (more details)

A Dewey bestseller, Compensatory Damages is the seminal text on how to support and defend against claims for compensatory damages and other remedial claims in federal sector employment discrimination cases. Includes case summaries through mid-2022 and a chart of significant awards. Major topics include equitable and compensatory damages, proving damages, mitigation and offset, back pay, collateral source rule, tax consequences, settlement, managing discovery, calculating damages, and attorney fees. (more details)